Background: Cervical pregnancies are infrequent and fatal. Systemic methotrexate (MTX) treatment is conventionally administered to preserve fertility and prevent hemorrhage. However, some patients do not respond to therapy.

Conclusion: Our results suggest that transvaginal aspiration should be considered an alternative upon failure of systemic MTX treatment or in the presence of contraindications for MTX injection.

Under normal physiologic conditions, a fertilized ovum migrates from the ampulla of the fallopian tube to implant on the wall of the endometrium. However, if the conception fails to reach its normal position within the endometrial cavity, an ectopic pregnancy occurs. Ectopic pregnancies result from extrauterine implantation of embryos and potentially result in fatal hemorrhage, thus warranting a prompt diagnosis and treatment. The cervix is a highly vascularized area, which is potentially suitable for the implantation of a fertilized ovum. However, it is also extremely vulnerable to heavy bleeding due to its suboptimal hemostatic mechanical capacity and its insusceptibility to respond to uterotonic agents. Most ectopic pregnancies occur in the Fallopian tubes, and less than 1% occur in the lining of the endocervical canal [1]. Commonly reported risk factors for cervical pregnancies include prior cesarean sections, dilation and curettage, and conception through in vitro fertilization (IVF) [2]. Cervical pregnancies occur in 0.1% of IVF-induced pregnancies and account for 3.7% of cases of ectopic gestation resulting from IVF [3]. Patients with cervical pregnancies may present with uncontrollable and profuse vaginal bleeding, for which emergent hysterectomy may be life-saving. Different approaches have been implemented, but due to the rarity of this condition standard recommendations have not yet been elucidated. Recently, hysteroscopic resection of ectopic CP was described as an effective and fertility-preserving surgical therapy, having been used alone or in combination with another complementary therapy. Conservative management constitutes first-line treatment for individuals desiring future pregnancy. Herein, we present the cases of two patients with cervical pregnancy conceived through IVF. In both cases, treatment with transvaginal aspiration of the cervical gestational sacs was successful.

A primiparous 38-year-old woman with cervical pregnancy induced through IVF-embryo transfer (IVF-ET) received multidose methotrexate (MTX); however, the gestational sac enlarged with an increase in β-human chorionic gonadotropin (hCG) levels, indicating treatment failure. Transvaginal aspiration was hence suggested. On the day of aspiration, the β-hCG level was 20585 mIU/mL, and fetal pole was observed (Figure 1). The gestational sac was undetectable upon sonography a week after aspiration and the β-hCG levels (determined serially) reverted to normalcy 2 months after the procedure. A primiparous 36-year-old woman with cervical pregnancy induced through IVF-ET (Figure 2) received systemic multidose MTX, which did not exert any therapeutic effects. On the day of aspiration, the β-hCG level was 8061.85 mIU/mL. Two weeks after aspiration, her β-hCG level was undetectable. 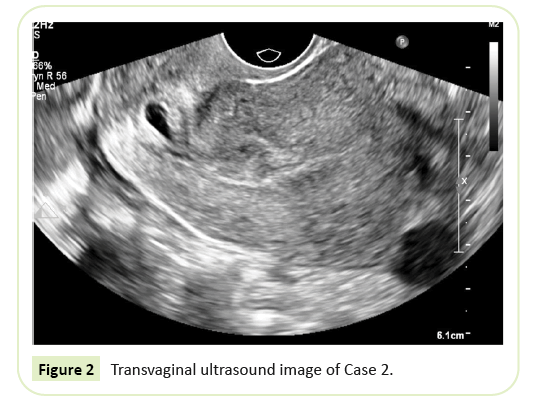 The incidence of cervical pregnancies, unlike that of tubal pregnancies, is extremely low; hence, no proven guidelines for pharmacotherapeutic or surgical treatment have been established. Before 1980, cervical pregnancies were diagnosed when dilation and curettage for presumed incomplete abortions resulted in unexpected hemorrhage [4]. Delayed diagnosis and treatment potentially result in massive bleeding, warranting hysterectomy. Advancements in ultrasound imaging have helped experienced physicians to identify such patients as early as the fifth gestational week.

In Case 1 described herein, despite systemic multidose MTX administration, an increase in the patient’s β-hCG level confirmed treatment failure. To spare fertility and prevent massive bleeding, salvage therapy was administered through transvaginal aspiration with the patient’s consent. Based on the favorable response observed in Case 1, the same procedure was performed in Case 2, wherein the patient’s condition was diagnosed at an even earlier gestational stage, thus preventing the increased risk of treatment failure. Bleeding levels were minimal in both cases, with no need for hospitalization.

The overall rate of ectopic pregnancy continues to rise. Early recognition of the signs and symptoms of ectopic pregnancy is paramount to achieving positive patient outcomes. Ectopic pregnancy remains challenging despite the substantial increase in number of incidences. Cervical pregnancies are rare but potentially lethal, with an increasing incidence owing to artificial reproductive methods. Thus far, no consensus has been obtained regarding the management of this condition. Our results suggest that transvaginal aspiration should be considered an alternative upon failure of systemic MTX treatment or in the presence of contraindications for MTX injection. A prompt diagnosis of cervical pregnancy would guarantee the success of conservative treatment.

Patients’ consent form were obtained before procedure and held by hospital documentation team.

The authors declare that they have no conflicts of interest.

This work was supported by Shin Kong Hospital.