How it is Possible to Diagnose in Prenatal Low Form of Anorectal Malformations?

Anorectal malformations (ARMs) of all (high and low) forms concern about 1/5000 births. Low form is difficult to diagnose prenatally. Isolated forms are rare; they are often present in the context of multiple malformation syndromes. From a rare case of prenatal diagnosis, ultrasound findings will be discussed as well as the role of three-dimensional ultrasonography (3D) nuclear magnetic resonance (MRI) and biochemical study of the amniotic fluid.

A 35-year-old woman, primigravida, was referred at 22 weeks of gestation for suspected multiple malformation syndromes with right renal abnormality, spinal lumbosacral abnormality right clubfoot and doubt as to the presence of an imperforated anus. The fetus male was eutrophic, with no abnormal external genitalia. There was no family history of congenital malformations or consanguinity. Ultrasound examination at 12 weeks of gestation has noted a nuchal translucency of 1.7 mm for a craniocaudal length of 53 mm with a combined risk of trisomy 21 estimated at 1/2777. The ultrasound examination confirmed abnormalities with hemivertebrae L4 and L5 (Figure 1and Figure 1b, and a horseshoe kidney to the left (Figure 1c and Figure 1d). 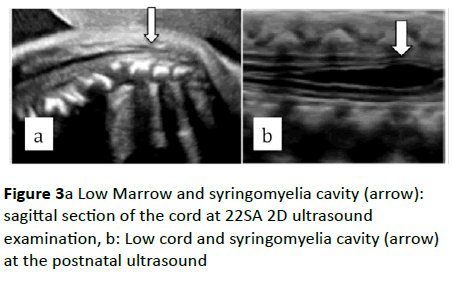 Karyotype was 46 XY, measurement of digestive enzymes was normal in the amniotic fluid. Fetal tomodensitometry at 30 weeks of gestation confirmed lumbosacral hemi-vertebrae and a lack of ossification of the first sacral vertebra.

The patient delivered at term a boy weighing 3000 g. The clinical child examination showed a right clubfoot and an anterior ectopic imperforate anus under the scrotum. Ultrasound examination of the sacral spine showed a significant syringomyelia cavity facing L4 spinal cord was confirmed by a spinal MRI. A simple anoplasty was performed.

We distinguish between high and low form of ARM depending on the level of disruption relative to the parietal insertion of the levator ani muscles. Antenatal diagnosis is essential in order to optimize perinatal care [1]. Despite advances in ultrasound technology, diagnosis of the isolated low form is only realized in 15% of the cases. In over 60% of the cases, it will be referred to indirect signs or associated malformations, such as renal and spinal abnormalities in 30% of the cases, and urogenital abnormalities in 40% [2]. RAMs is often associated with major fetal structural defects, for example, in the VACTERL association (vertebral anomalies, cardiac, tracheoesophageal, renal and lower extremity) or with trisomies but it may also be an isolated abnormality [2].