Introduction: Epithelial inclusion cyst is a common type of cutaneous cyst that results from implantation of epidermal elements in the dermis and can occur throughout the body. It is often seen in the perineum and posterior vaginal wall, and lined by stratified squamous epithelium. This desquamates and produces secretions to form a cystic mass. This is called clitoridal inclusion cyst when it involves the clitoris. It is usually a complication of female genital mutilation/ cutting. Case presentation: She was a 27-year-old young woman, who presented to the gynaecological clinic with a 15-year history of progressive swelling in her perineum. She was circumcised at the age of 10 years. She had surgical excision under anaesthesia, and was discharged home in good health condition. Conclusion: Evaluation of clitoridal inclusion cyst requires careful assessment by a good history, detailed physical examination and necessary imaging modality, as this will help to rule out differential diagnosis and manage the patient better.

Epithelial inclusion cyst is a common type of cutaneous cyst that results from implantation of epidermal elements in the dermis and can occur throughout the body [1]. It is often seen in the perineum and posterior vaginal wall, and lined by stratified squamous epithelium [2]. This is called clitoridal inclusion cyst when it involves the clitoris. It is common in Nigeria and other parts of Africa, Middle East and Asia [3-5] due to the prevailing cultural practices in these environments. Clitoridal inclusion cyst accounts for 5.7% of gynaecological cases in Benin, South-South Nigeria [6] and 4% in Eastern Sudan [7]. Clitoridal inclusion cyst usually occurs as a result of female genital mutilation/cutting [8,9] trauma, or infection [1].

She was a 27-year-old woman, who presented to the gynaecological clinic with a 15-year history of progressive swelling in her perineum. Fifteen years prior to presentation, a swelling was noticed at the anterior aspect of the vulva. This swelling was initially small but had gradually and progressively increased in size. The swelling had not bothered her until 10 months prior to presentation as the size increased significantly, with recurrent ulceration. There was no associated, pain, discharge, bleeding or itching. Her external genitalia were normal before circumcision at the age of 10 years. There was no swelling in any other part of the body, acne, deepening of voice or abnormal hair distribution. She attained menarche at the age of 16 years, and menstruated for 5 days in a regular cycle of 28 days. There was no history of dysmenorrhea, menorrhagia or abnormal vaginal discharge. She had not attained coitarche.

Physical examination revealed a healthy-looking young woman, not pale, afebrile, anicteric, not dehydrated no pedal oedema and no peripheral lymphadenopathy. The pulse rate was 78 beats/min, and the blood pressure was 110/60 mmHg. The liver and spleen were not palpably enlarged and her kidneys were not ballotable. Perineal examination revealed a 12 cm by 8 cm cystic, mobile, non-tender, rounded, well-circumscribed mass in the peri-clitoral area (Figure 1). The labia minora, majora, urethral orifice, vaginal orifice, and hymen were normal. There was no bleeding or discharge. 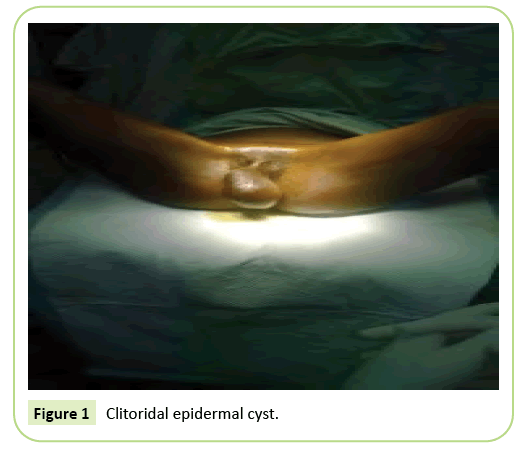 She was counselled on her condition, the possible cause and management of the condition. A written informed consent was obtained for surgical excision under anaesthesia. Theatre was booked for the procedure. Anaesthesia was administered and patient was placed in lithotomy position. After routine cleaning and draping, and insertion of size 16 Foley’s urethral catheter, the surrounding skin of the clitoral cyst was infiltrated with adrenaline to reduce blood loss. A circumferential incision was made around the base of the cyst and deepened to the fascial plane of the cyst wall. Figure 2 shows the procedure in progress. Bleeding points were secured using mosquito artery forceps and ligated with chromic 3/0 catgut. By blunt and sharp dissections, the cyst was freed from the surrounding skin and subcutaneous tissue. It was also freed from its attachment at the base, and bleeding vessels were ligated with 3/0 chromic catgut. The dead space was obliterated using 3/0 chromic catgut. The redundant skin was then excised and the skin closed with interrupted stitches of 3/0 chromic catgut (Figure 3). The operation was well tolerated. Blood loss was minimal. The cyst (Figure 4) was sent for histological examination. She had analgesics and prophylactic antibiotics. She recovered from anaesthesia, and her immediate postoperative condition was satisfactory. Foley’s urethral catheter was left in situ for 24 hours to prevent urinary retention from pain. There was no dysuria, urinary retention and frequency. She was discharged home on the second postoperative day, and was given a two-week follow-up appointment to the gynaecological clinic. 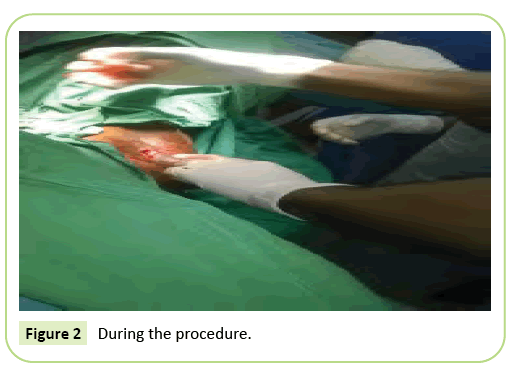 Figure 2: During the procedure. 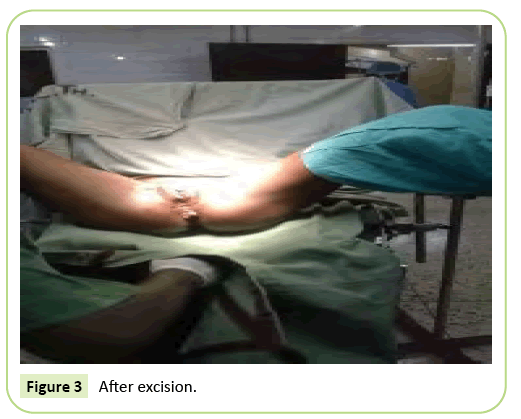 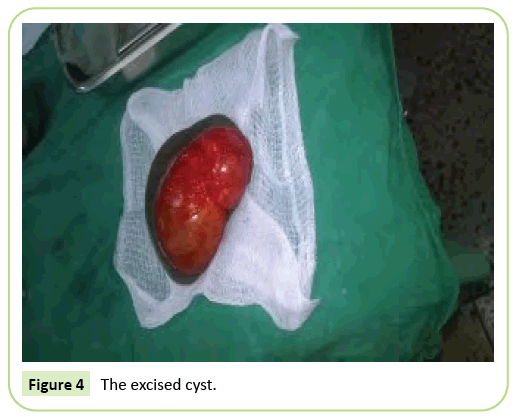 The commoner pathophysiology of clitoridal inclusion cyst is the invagination of the epithelial islands of cells during the time of healing at the site of the excised clitoris. Application of herbal substances after operation and infections also contribute to the formation of the cysts [4,12]. This implanted skin fragments which contain active sebaceous glands result in cyst formation from accumulated sebaceous secretions. This condition is usually asymptomatic; pain may be as a result of complication. They may become inflamed or secondarily infected and ulcerated if it is large in size. Rarely, malignancies, including basal cell carcinoma, Bowen disease, squamous cell carcinoma, and mycosis fungoides, have developed within epidermoid cysts.

Differential diagnosis of clitoridal inclusion cyst include Gartner’s duct cyst, cyst of the canal of Nuck and cyst of Skene’s glands, true hermaphroditism, adrenal hyperplasia, clitoral, ovarian, and adrenal neoplasms, stromal hyperthecosis, polycystic ovarian syndrome, and exogenous androgen exposure [1,17]. With a detailed history and good clinical examination, the diagnosis of clitoridal inclusion cyst is most times correct. In the patient presented, the diagnosis was based on the history of a painless central mass, completely replacing the clitoris, history of circumcision and the absence of the cyst prior to circumcision. The history of absence of the cyst at birth and prior to circumcision as well as the histology report which revealed a cyst wall lined by stratified squamous keratinized epithelium confirmed the diagnosis. Pelvic ultrasound scan is done occasionally to rule out differential diagnoses.

The treatment of choice in this condition is surgical with enucleation of the cyst and its capsule or marsupialization [1,2,11] However, great care must be taken not to traumatize the urethral orifice and the surrounding vulvae tissues. Sometimes haemorrhage may be a complication [11] hence care was taken to identify bleeding points at the bed of the cyst and were ligated while the flap of redundant tissue left was trimmed off and the wound closed with obliteration of dead space. Though surgery in clitoridal inclusion cyst is mainly for cosmetic reasons, cases of divorce resulting from coital difficulties due to the large cyst have been reported [17].

Evaluation of clitoridal inclusion cyst requires careful assessment by a good history, detailed physical examination and necessary imaging modality, as this will help to rule out differential diagnosis and manage the patient better.