A Report of Two Cases of Hammans Syndrome

Hamman’s syndrome is the development of pneumomediastinum and subcutaneous emphysema and can result from the forced Valsalva manoeuvre in labour. Here I present a two cases of primiparous women who both developed Hamman’s syndrome with their first deliveries and follow them through to their second deliveries. Both women received antenatal care and postnatal care at the same level 4 suburban maternity care unit. They were treated conservatively and recovered spontaneously. No recurrence of the condition was observed following subsequent deliveries. Only limited cases have been reported of Hamman’s syndrome. In the absence of haemodynamic instability or more serious disease the recommended treatment approach is conservative.

Hamman’s syndrome is the development of spontaneous pneumomediastinum and subcutaneous emphysema; it was first reported in 1939 by American physician Louis Hamman [1]. Here I report two cases in primiparous women who both developed Hamman’s Syndrome postpartum with their first deliveries and have been followed through to their second deliveries. The women both received antenatal care and postnatal care at the same level 4 suburban maternity care unit for both of their pregnancies.

Pregnancy 1: A 28-year-old primiparous women with no significant past medical history, a normal BMI and a normal antenatal course, presented to the birthing unit in early labour at 40+1. She progressed through the first stage of labour in 6 hours using nitrous oxide and water emersion for analgesia. There was significant vomiting during the active 1st stage of labour. Artificial rupture of membranes was performed due to maternal request at 8 cm. Second stage lasted 115 mins; there was a single pull vacuum assisted delivery of a well 3.7 kg baby in the lithotomy position due to maternal exhaustion. Third stage lasted 5 mins and was managed actively. She received 10 units IM syntocinon, as well as 250 mcg ergometrine IM due to uterine atony. There was a 400ml estimated blood loss given.

Twelve hours postpartum the patient described a ‘crackling’ sensation under her left jaw and ear. She was assessed by the resident doctor and found to have subcutaneous emphysema that could be felt localised to left mandible and upper neck, no other significant signs or symptoms were noted. Due to the patients haemodynamic stability no further investigations were ordered. Later that evening the patient began experiencing a sore throat and some difficulty swallowing. At this point the patient was reviewed by the obstetric registrar who ordered a chest x-ray and commenced oxygen therapy. Chest x-ray revealed subcutaneous emphysema. The obstetric registrar discussed the case with an on call cardiothoracic registrar and was advised to perform CT scan with contrast (Figure 1). 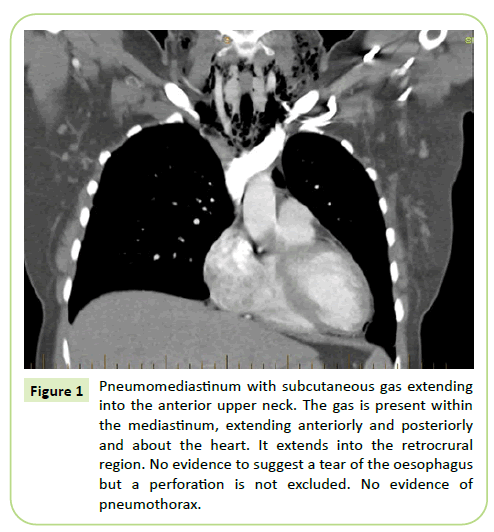 Figure 1: Pneumomediastinum with subcutaneous gas extending into the anterior upper neck. The gas is present within the mediastinum, extending anteriorly and posteriorly and about the heart. It extends into the retrocrural region. No evidence to suggest a tear of the oesophagus but a perforation is not excluded. No evidence of pneumothorax.

CT scan reported pneumomediastinum with subcutaneous gas. No pneumothorax or obvious oesophageal tear was noted. She initially received 24 hours IV cefazolin to treat possible mediastinitis. The patient remained haemodynamically stable overnight with no progression of her symptoms. There was no suspicion of oesophageal rupture and so antibiotics were ceased. She continued to have conservative management on the ward and was discharged home on day 4 postpartum. By day 9 postpartum she reported complete resolution of her symptoms.

Pregnancy 2: Three years later she returned for antenatal care to the same hospital. During this pregnancy she was referred to the Obstetric Medicine clinic. Following this review she was advised to avoid a prolonged second stage with her next delivery. An echocardiogram was also ordered due to the patient reporting mild dyspnoea. The echocardiogram was normal and other than diet controlled gestational diabetes the antenatal course was unremarkable.

At 39+3 weeks she presented in spontaneous labour and progressed to have a normal vaginal delivery of a 3.8 kg baby. The labour and delivery were uncomplicated. The 1st stage lasted 4 hours, 2nd stage 10 mins and active 3rd stage lasting 12 mins.

Postpartum the patient had no signs of repeat spontaneous pneumomediastinum or subcutaneous emphysema. Her observations were normal and she was discharged home 36 hours postpartum.

Pregnancy 1: A 22-year-old primiparous lady with type 1 Von Willebrands disease but otherwise well, with a normal BMI. Her antenatal course was complicated by shortness of breath and palpitations at 28 weeks. This was investigated with Doppler ultrasound of the legs and a V/Q scan, which identified no abnormality.

At 38 weeks she presented in spontaneous labour and progressed to have a normal vaginal delivery of a 3.1 kg baby in the kneeling position, with a 2 hour 1st stage and 25 mins 2nd stage. Active management of the third stage of labour with intramuscular syntocinon, plus an additional intravenous syntocinon infusion and PR misoprostol were given, there was an estimated 450ml blood loss.

One hour postpartum whilst mobilising to the shower in the delivery room she developed pleuritic chest pain and tachycardia to 130. Other than the tachycardia no additional signs or symptoms were found on examination. An ECG and chest x-ray was ordered. The ECG showed a sinus tachycardia. The chest x-ray revealed pneumomediastinum and subtle air tracking along the soft tissues of the neck. The case was discussed with the on call medical team who advised performing a CTPA, as well troponins and a full blood count. Troponins both initial and 12 hour were negative. Full blood count revealed anaemia with HB 103 so the patient was commenced on oral iron tablets. The CTPA showed extensive pneumomediastinum with subcutaneous emphysema extending into the fascial planes of neck. There was no pulmonary embolism and no associated pneumothorax.

The patient’s tachycardia settled and she received conservative management. The following day surgical emphysema was palpable in the anterior neck. The patient continued to experience chest pain and in addition was now experiencing a sore neck and some difficulty with swallowing.

Pregnancy 2: During the patients subsequent pregnancy 4 years later. An obstetric medicine appointment was arranged however the patient failed to attend this appointment. The patient was advised by the obstetric team at the hospital to avoid prolonged pushing in the 2nd stage of labour and to have consider early assisted delivery.

At 38+5 weeks the patient presented in spontaneous labour. An Epidural for analgesia was cited as per the patient’s request. There was a normal 5 hour 1st stage. The patient’s 2nd stage was prolonged lasting 2 hours and 30 mins. She had 2 hours of passive descent and 30 mins of gentle pushing, the patient declined assisted delivery. A well 3.3 kg baby was born vaginally. There was an uneventful active third stage with an estimated 400 ml blood loss.

Postpartum other than mild anaemia that was treated with oral iron there were no complications. Observations were normal and the patient developed no signs or symptoms to suggest recurrence of a spontaneous pneumomediatsinum or subcutaneous emphysema. The patient was discharged home after 24 hours observation.

Spontaneous pneumomediastinum and subcutaneous emphysema are referred to as Hamman’s syndrome, after it was first reported in an obstetric patient by American physician Louis Hamman in 1939 [1]. It is thought that barotrauma due to forced Valsalva occurring in the second stage of labour is likely to be responsible [2]. Rupture of alveoli allows gases to travel into the mediastinum and then track superiorly into subcutaneous spaces of the neck resulting in subcutaneous emphysema [3] The signs and symptoms most commonly experienced are subcutaneous emphysema, tachycardia, chest pain, dyspnoea, and throat discomfort [4,5]. Hamman’s syndrome is thought to be uncommon occurring in only 1 in 100000 vaginal deliveries [6]. It has been suggested that it is more common in primiparous women [7]. Indeed the two cases I have presented were in primiparous women who both developed Hamman’s Syndrome with their first deliveries but not with their subsequent deliveries. There have been no reported cases of recurrence of Hamman’s syndrome in subsequent pregnancies and outside of pregnancy there is thought to be a low risk of recurrence in people who have experienced spontaneous pneumomediastinum [8]. The diagnosis of Hamman’s syndrome is made by thorough examination and a chest x-ray. CT scan may also be used as chest x-ray may fail to identify 30% of pneumomediastinum [9]. In the absence of more serious disease such as pneumothorax, cardiac tamponade or oesophageal rupture the preferred treatment is conservative as the natural course of Hamman’s syndrome is thought to be benign with subcutaneous air being gradually reabsorbed.

The above reported cases of two women both primaparous developing Hammans syndrome with their first deliveries and having follow through to their second deliveries provides a unique addition to the limited case reports on this subject. The cases above provided support to the exisiting case reports that suggest Hammans syndrome may be more prevalent in primiparous women. They also provide support that recurrence rates may be low and that conservative management is likely all that is required in the haemodynamically stable patient. Although an uncommon occurrence it is nevertheless a useful addition to the differential diagnosis for the Obstetrician and midwife to be aware of in a patient experiencing chest pain, dypnoea or throat discomfort intra or postpartum.